One point gained keeps the Boys in Gold in eighth place in the Eastern Conference and even on points with seventh-place New York Red Bulls. Sitting five points above the playoff line and with four matches remaining in the regular season, Nashville faces a crucial test on Tuesday night in Harrison, N.J. against Montreal Impact, who sit directly below Nashville in the standings.

A goal apiece, a point apiece and we remain unbeaten at home since the restart 💪#EveryoneN #NSHvNE pic.twitter.com/m7JkXGhOIM

Zimmerman zaps one: Zimmerman’s set piece goal in the 74th minute was his third of the season and second set-piece header in his last four matches. It was the team’s fourth goal off of a corner kick and seventh goal off of a set piece this season. He is now tied with Hany Mukhtar and Daniel Ríos for the team lead in goals. Zimmerman made four clearances on the defensive end as well.

Defensive contribution: Nashville’s defensive performance stayed solid with the only blemish coming from an impressive low shot from striker Adam Buksa that landed in the bottom-left corner of the net in the 77th minute. Head Coach Gary Smith fielded in a three-center-back formation to start the match that echoed his defensive choice in the 3-1 win over the Houston Dynamo on October 14. At halftime, Smith made a formation change to give his team more of an attacking advantage, causing him to string four players along the backline. Nashville won 30 of 47 duels in the second half, and defensive midfielder Aníbal Godoy led both teams in possessions gained with 13.

Anunga steps up: Defensive midfielder Tah Brian Anunga continued his strong form in the center of the field. The Cameroonian partnered with Godoy for the first 58 minutes of the match before Dax McCarty replaced Godoy. Anunga made four interceptions and eight recoveries. He had the highest passing accuracy of all Nashville SC starters and completed the most successful passes on the team with 38 of 44 attempted.

Home cookin’: With the draw, Nashville SC is now unbeaten at home in eight matches (4W-0L-4D) since the MLS season restarted. You’d have to go back to Nashville’s MLS debut, a 2-1 loss to Atlanta United on February 29th, to find the club’s last home loss. In those eight matches, Nashville has outscored its opponents 12-5.

Weathering the storm: The 80-minute delay due to thunderstorms led to a slow start for both teams. Neither side put a shot on target for the first half-hour of the match, and the first goal did not come until the final 16 minutes.

NSH – Walker Zimmerman (Randall Leal), 74th minute: Nashville wins three corner kicks in as many minutes in the second half. On the third opportunity, Randall Leal sends in a well-placed ball into the box to connect with Walker Zimmerman, who heads it powerfully into the upper right corner of the net.

NE – Adam Buksa (Kekuta Manneh), 77th minute: Kekuta Manneh gets the ball in space outside the box and nudges it around the defender to Adam Buksa on the edge of the box. Buksa turns and drives the ball into the bottom-left corner.

Up Next
Nashville SC travels to Harrison, New Jersey to face off against Montreal Impact on Tuesday, October 27. The match kicks off at 6:00 p.m. CT and will be broadcast live on MyTV30, ESPN 94.9 and El Jefe. 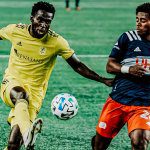 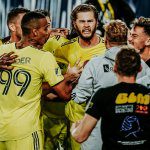