The game will be played without fans as a result of the COVID-19 pandemic.

Nashville SC enters the match riding a three-match unbeaten streak at Nissan Stadium after posting its highest offensive statistical output of the season in a 4-2 win over Atlanta United FC on Sept. 12.

Coming into its 12th league fixture, Nashville has amassed a 3W-3L-3D record and four shutouts since returning to Major League Soccer action on Aug. 12, with six of the nine matches taking place on the road. 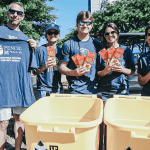