NASHVILLE — Grammy, ACM, CMA and AMA award-winning group Little Big Town will perform the national anthem prior to the Jan. 10 home playoff game between the Tennessee Titans and Baltimore Ravens. The group recorded the performance on the field at Nissan Stadium earlier in the week.

Group members Karen Fairchild, Phillip Sweet, Kimberly Schlapman and Jimi Westbrook debuted in country music over 20 years ago and have produced numerous No. 1 singles such as “Better Man,” “Pontoon” and “Girl Crush.” They are inductees of the Grand Ole Opry and received a star on the Nashville Walk of Fame in 2017.

Nashville-based, Indie-alternative rock band Moon Taxi will perform a special halftime show at Sunday’s game featuring songs from their new album, Silver Dream, which releases on Jan. 22. The performance was recorded earlier in the week.

Moon Taxi, consisting of band members Trevor Terndrup, Spencer Thomson, Tommy Putnam, Wes Bailey and Tyler Ritter, have performed at Coachella, Bonnaroo and Austin City Limits, and gained further national attention through performances on shows such as TODAY and Jimmy Kimmel Live. The group has participated in several Titans-related activities in the past and kicked off the 2019 NFL Draft Experience with a performance on the Main Stage.

Weather permitting, a flyover is scheduled at the conclusion of the national anthem prior to kickoff of Sunday’s game. The flyover will be conducted by Fort Campbell’s 101st Airborne and features three CH-47F Chinook helicopters flown by the historic “Pachyderms” of Bravo Company, 6th Battalion, 101st Combat Aviation Brigade, “Wings of Destiny.”

The Chinook is the fastest and most powerful helicopter in the U.S. Army’s inventory. The 101st Combat Aviation Brigade is currently deployed across three continents supporting operations in Korea, Kuwait and Europe while also training soldiers at Fort Campbell. The unit was also part of the Nov. 8 game flyover, designated as the NFL’s “Salute to Service” game.

"[Our response] was a total team effort. It was not what one individual did or said, it was about all of us coming together to protect our community."#Titans to Honor 'Nashville Six' as 12th Titan 📰 » https://t.co/qcznzt3Mt9

As announced previously, the six first responders who safely evacuated residents before the Dec. 25 explosion in downtown Nashville will be honored as Sunday’s 12th Titans. Officers Brenna Hosey, Tyler Luellen, Michael Sipos, Amanda Topping, James Wells and Sergeant Timothy Miller will attend the game and plunge the Titans Sword of Honor to mark the countdown to kickoff. 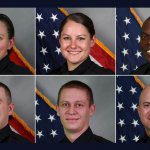 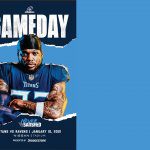