NASHVILLE — Sunday’s game will mark the first time a Titans home game will allow fans at a capacity of 21 percent, the highest capacity for a Titans game in the 2020 season. The capacity marks the maximum allowable audience under current CDC guidelines. It is expected that capacity will stay at this amount throughout the remainder of the season.

More information on the stadium’s Safe Stadium Plan can be found at www.tennesseetitans.com/safestadium.

Sunday will mark the Titans’ “Salute to Service” game, a league-wide NFL initiative to honor and empower our nation’s service members, veterans and their families. Titans founder K.S. “Bud” Adams, Jr. was the NFL’s inaugural Salute to Service Award winner in 2011. Elements of the day include:

The Titans Virtual Community Drive leading into the Sunday, Nov. 8 home game against the Chicago Bears asks for coats and other cold-weather items to benefit local homeless and domestic violence shelters. Coats can be purchased at www.tennesseetitans.com/charitydrives and will be distributed by the Titans to our neighbors in need. 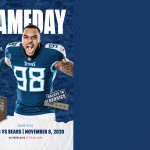 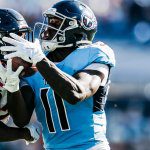