Former Titans standout Josh Evans will be featured as 12th Titan prior to Sunday’s noon kickoff. Evans, 48, was a defensive lineman for the Oilers/Titans from 1995-2001, playing in 71 games with the franchise. He was diagnosed with cancer in January and has been fighting the disease at a cancer treatment center in Georgia.

In the pre-recorded video package, several former Titans deliver well-wishes to Evans in his recovery. At the end, Evans provides a message to fans: “Hi Tennessee fans, this is Josh Evans. I just wanted to thank you for your support and prayers. Titan Up!”

Evans continues his battle with cancer in Atlanta.

This Sunday, the Titans will become the first NFL team to utilize its fan cutout program to promote pet adoption. The Titans and Mars Petcare teamed up on over 200 cutouts of adoptable pets from shelters in both Nashville and Houston. The initiative is a key component of Mars Petcare’s annual BETTER CITIES FOR PETS™ Adoption Weekend, which is being held virtually this year. Mars Petcare will cover up to $100,000 in adoption fees throughout the weekend.

Viewers will be able to see the pets in the stands and can visit www.BetterCitiesforPets.com/AdoptionWeekend2020 for more information about adoption.

Fan capacity for Sunday’s matchup against the Houston Texans will be 15 percent, the largest capacity Nissan Stadium has hosted since it reopened to fans. Beginning in November, capacity will move to 21 percent through the end of the season. Twenty-one percent is the maximum Nissan Stadium can accommodate under current CDC regulations.

Just two days left to participate in the @Titans virtual charity drive benefiting @2HarvestMidTN! 1 in 8 Middle Tennesseans struggle with hunger daily, but with your help we can make sure that changes. Visit https://t.co/QbtyyoKux1 to donate food today! pic.twitter.com/NJxp4XNV9D

This week’s Titans Community Drive benefits Second Harvest Food bank, which feeds hungry children, families and seniors throughout 46 counties in Middle and West Tennessee. The organization works to combat hunger issues in our community that are experience by 1 in 8 middle Tennesseans. To participate, fans can visit www.tennesseetitans.com/charitydrives to donate from the wish list. All items will be shipped directly to Second Harvest.

Titans Community Drives have moved completely virtual this season and will benefit a local organization leading up to each Titans home game. 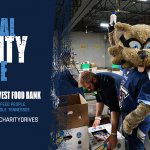 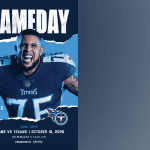