The Tennessee Volunteers and Virginia Cavaliers will open their 2023 seasons on Sept. 2, 2023 inside Nissan Stadium, the Nashville Sports Council announced Monday.

A kickoff time will be announced at a later date.

This will be the third time Tennessee has played in a regular season non-conference game at Nissan Stadium since taking on Bowling Green in 2015 and Wyoming in 2002. The Vols last played at Nissan Stadium in December during the 2021 TransPerfect Music City Bowl.

“We are thrilled to welcome the Vols and Cavaliers to Nashville on opening weekend of the 2023 college football season,” Nashville Sports Council President and CEO Scott Ramsey said. “Both programs have a place in Nashville Sports history, having both played in the TransPerfect Music City Bowl. We look forward to hosting them along with their loyal fanbases and once again showcasing Nashville on a national stage.”

Virginia returns to Nissan Stadium for the first time since 2005 when the Cavaliers took on Minnesota in the then- Gaylord Hotels Music City Bowl presented by Bridgestone. Virginia won that game 34-31 on a late field goal. Quarterback Marques Hagans, who now serves as Virginia’s associate head coach and wide receivers coach, was named MVP.

For more information on this game and more sporting events coming to Nashville, visit NashvilleSports.com. 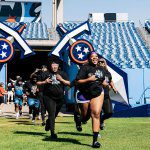 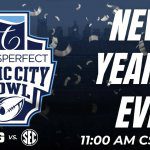