NASHVILLE — The Tennessee Titans (6-2) host the Indianapolis Colts (5-2) this week in a nationally-televised, primetime battle for first place in the AFC South. Kickoff at Nissan Stadium is scheduled for 7:20 p.m. CST on Thursday, Nov. 12.

Ticket sales for the contest were limited to 21 percent of the venue’s normal capacity following current Center for Disease Control guidelines. Detailed information on the team’s Safe Stadium Plan can be found at tennesseetitans.com/safestadium.

Fans can livestream the broadcast on their mobile devices from the Titans Mobile App (iOS and Android) and on TennesseeTitans.com mobile web. Restrictions apply. For more information and additional options visit TennesseeTitans.com or
NFL.com/ways-to-watch.

Additionally, Westwood One Sports will broadcast the game to a national radio audience. Play-by-play announcer Tom McCarthy and analyst Tony Boselli will have the call.

The Titans’ meeting with the Colts comes four days after ending a two-game losing skid with a victory at Nissan Stadium over the Chicago Bears. They used two touchdown passes by Ryan Tannehill and a touchdown on defense to win by a final score of 24-17.

Newcomer Desmond King II scored for the Titans on a 63-yard fumble return less than a week after he was acquired in a trade with the Los Angeles Chargers. The fourth-year cornerback was one of five players to make his Titans debut against the Bears, capping an eventful week that saw the team record 18 total transactions to their active roster, practice squad and reserve lists.

Tannehill completed a 40-yard touchdown pass to wide receiver A.J. Brown and connected with tight end Jonnu Smith for a two-yard touchdown. It was his fifth consecutive game with at least two touchdown passes and his seventh two-touchdown performance in 2020. His 109.4 passer rating in 2020 ranks sixth in the NFL.

A victory over the Colts would give the Titans a two-game lead in the AFC South and a 3-0 divisional record. They would hold a win over each of their division foes, and the Colts would drop to 0-2 within the division. Meanwhile, a Colts victory would even the clubs’ records at 6-3 and would provide the Colts a head-to-head edge with the rematch at Indianapolis scheduled for Nov. 29.

The Colts, who have the NFL’s top-ranked defense (290.0 yards allowed per game), will travel to Tennessee on a short week following a 24-10 home loss to the Baltimore Ravens in Week 9.

Quarterback Philip Rivers is in his first season in Indianapolis after joining the club as an unrestricted free agent from the Los Angeles Chargers during the offseason. The eight-time Pro Bowl selection and Athens, Ala., native ranks sixth in NFL history in passing yards (61,358) and passing touchdowns (407).

The Colts are trying to get back to the playoffs under Frank Reich, who is in his third season as the organization’s head coach. After he spearheaded a 10-6 record and a first-round playoff win in 2018, the Colts finished 7-9 in 2019. 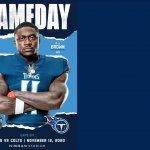 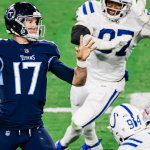