NASHVILLE — The Tennessee Titans and the City of Nashville have announced that they are engaged in formal discussions regarding the future of Nissan Stadium. The discussions aim to secure the Titans’ future in Nashville and facilitate the creation of a new Nashville neighborhood surrounding the facility.

While preliminary talks between the Titans and previous administrations have taken place over several years, Mayor Cooper’s administration has advanced the conversations markedly to create the framework of a solution beneficial to all parties.

“A bold vision brought the Titans to Nashville more than 20 years ago, and a renewed vision will secure the Titans’ future in our great city,” said Mayor John Cooper.

The vision for the East Bank neighborhood project would foster the creation of thousands of jobs and generate millions in new tax revenue annually that would be used to mitigate the city’s direct financial burden outlined in the present lease. The development would be privately funded and resulting tax revenue used to fund substantial upgrades to Nissan Stadium. Current concepts for the neighborhood include a gathering of mixed public and private use facilities such as riverfront parks, green space, housing, offices, retail and restaurants.

"A bold vision brought the Titans to Nashville more than 20 years ago, and a renewed vision will secure the Titans' future in our great city." – @JohnCooper4Nash #Titans, City of Nashville in Talks on Future of @NissanStadium 📰 » https://t.co/x7WWRVdJbn

“Today is a big day for the Tennessee Titans organization, as we look to the future of Nissan Stadium and surrounding area,” said Titans controlling owner Amy Adams Strunk. “Our biggest priority throughout this process has been to envision a space that Nashvillians would be proud of, built with the community in mind. The idea of our stadium in a neighborhood where locals can live, work and enjoy, is something we’ve been focused on for a long time.

“Not only will the project serve generations of Nashvillians to come, but it will generate the revenue needed to provide Metro with substantial financial relief. We’re so appreciative of Mayor Cooper’s enthusiasm for this project.”

In coming weeks, leadership from both Metro Nashville and the Titans front office will continue to meet to discuss further details of the project and lease extension.

“The plan for a vibrant neighborhood along our city’s East Bank, bringing people closer to parks and creating opportunities for local businesses, is a huge opportunity for our community,” said Cooper. “I am committed to a solution that best fits the needs of Nashville, and I know the Titans share that same commitment.”

Fans can sign up to receive news and updates on the future of Nissan Stadium and the surrounding campus at www.tennesseetitans.com/stadiumupdates. 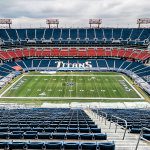 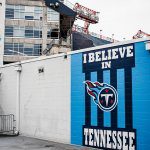 ‘I Believe in Tennessee’ Mural Debuts at Nissan StadiumNews