NASHVILLE — Nashville SC looks to pick up its first win over Atlanta United when the Southeast foes square off  Saturday night (7:30 p.m., CT) at Nissan Stadium. The game will be played without fans as a result of the COVID-19 pandemic.

Nashville SC (2W-4L-3D) is coming off consecutive draws against Orlando City SC and Inter Miami CF, extending its unbeaten streak to three games. Atlanta (3W-5L-2D) got off to another slow start, chased the game and lost at Inter Miami 2-1 on Wednesday night.

After sharing the points with Inter Miami CF in a goalless draw, Nashville SC announced some attacking help is on the way. The club signed forward Jhonder Cadiz from SL Benfica on loan with an option to buy, the club announced Wednesday. Cadiz will be added to the roster as a Designated Player.

“Jhonder has been an outstanding striker at the highest of levels in both European and South American competitions, and we think his game is tailor-made for Major League Soccer,” Nashville GM Mike Jacobs said in a statement. “The combination of his athleticism and clinical ability around the box made him heavily sought after. We feel fortunate to be able to add him to our club.”

The winless streak, and the frustrations, continue to mount for Atlanta United, which has now gone four matches without a win following a 2-1 loss in Fort Lauderdale Wednesday night. The first of Lewis Morgan’s two goals forced the Five Stripes to try and come from behind again — a recurring theme during this stretch. Eric Remedi did equalize, only to have Morgan score again five minutes later.

A bizarre penalty kick sequence saw Luis Robles twice deny Ezequiel Barco, though interim coach Stephen Glass couldn’t understand why defender Nicolas Figal wasn’t sent off for his challenge on Jon Gallagher that resulted in the point to the spot.

“I asked the referee quite calmly, but he explained that it was not an elbow, he didn’t feel there was any aggression,” he said. “But I’ve watched it. I saw it at the time, it’s clear as day, and I’ve seen it on video. He steps across and uses his forearm to smash our player in the face. There’s no country on the planet that’s not a red card.”

Atlanta United won both of the previous meetings, ruining Nashville SC’s historic opening MLS match on Feb. 29 with a 2-1 victory at Nissan Stadium and celebrating a 2-0 home triumph August 22.

STREAMING: MLS LIVE on ESPN+ in US, on DAZN in Canada 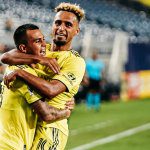 Nashville SC Battles Back for 1-1 Draw vs. Orlando City SC at Nissan StadiumSoccer 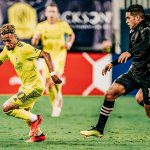