After conceding in the first half, Nashville SC came out swinging in the second half, leading to Leal’s goal in the 47’ minute.

The two teams traded chances in the opening minutes as Nashville and Orlando each earned corner kicks in the 1’ and 2’ minutes, respectively. After that, the pace of the match calmed down as Orlando dictated the tempo.

The Lions were rewarded with their possession in the 17’ minute when Benji Michel forced a turnover at the top of the box and rifled a shot off the far left post and into the back of the net. Nashville responded as the half wore on with stronger possession and some chances. Off of a corner kick in the 40’ minute, defender Walker Zimmerman got his head on the end of a corner kick, but the attempt sailed high and wide.

Nashville started the second half on the front foot, dominating the opening minutes. In the 47’ minute, midfielder Anibal Godoy dropped a pass to midfielder Hany Mukhtar at the top of the box, who coolly lofted the ball forward for an oncoming Leal to finish one-on-one with the keeper to even the score.

The Boys in Gold followed the goal up with three consecutive corners between the 50’ and 52’ minutes. Minutes later in the 57’ minute, forward Dominique Badji moved with pace down the right flank, cut towards the top of the box and fired a shot that was narrowly parried by Orlando goalkeeper Pedro Gallese.

In the 76’ minute, Nashville continued to press, and forward David Accam had a phenomenal individual effort that was snagged by Gallese.

Orlando pressed for a winner late on, and had a great chance in front of goal in the 84’ minute, but goalkeeper Joe Willis was up to the task, bravely sliding forward to deflect the point-blank chance and keep the score even.

3 – Leal was a workhorse on offense for Nashville, taking three of the team’s eight shots on the night. He also took two of Nashville’s four shots on target.

Nashville SC hits the road once again this weekend for a nationally-televised clash with Inter Miami CF. Kickoff is slated for Sunday night at 7:00 p.m. CT on Fox Sports 1.

Nashville SC heads south to Fort Lauderdale, Fla. on Sunday, Sept. 6 as the Boys in Gold take on Inter Miami CF at 7:00 p.m. CT on a nationally televised match on FS1. The match will be Nashville’s seventh fixture in 25 days. 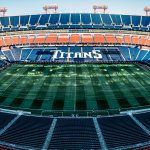 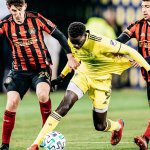