NASHVILLE — Striker Daniel Ríos scored for the second consecutive match for Nashville SC (4W-5L-4D) as the club drew 1-1 with Houston Dynamo (3W-4L-7D) at Nissan Stadium on Saturday afternoon. With the result, the Boys in Gold extended their home unbeaten streak to five matches with a record of 3W-0L-2D since returning to play on Aug. 12. Ríos scored in the 49’ minute off of an assist from second-half sub Derrick Jones, the first in his Major League Soccer career.

An 89’ minute goal off a corner kick from experienced defender Maynor Figueroa saw the visitors steal a point in Nashville’s last home match without fans. Goalkeeper Joe Willis set a career-high in saves, making seven against his former club. NSC has taken at least a point in six of its last seven matches, the one loss coming against league-best Columbus Crew SC.

GAME OF INCHES: The first half ended with Nashville having seen two golden scoring opportunities ruled out due to offside calls. In the 22’ minute, midfielder Hany Mukhtar freed winger Randall Leal with a through ball. The Costa Rican entered the box, and defender Adam Lundkvist went in too hard. The assistant referee said that Leal was offside as Mukhtar played the pass.

In the 33’ minute, defender Jalil Anibaba played an inch-perfect long pass from the right-back position to Ríos, who controlled the ball and got it to roll past goalkeeper Marko Maric. The assistant referee put his flag up for another tight offside call against Nashville SC.

Risk vs. Reward: Nashville opted to make the field as large as possible when in possession. Instead of trying to slowly build up through the midfield, Head Coach Gary Smith’s side played lots of long balls to break in behind Houston’s defense. A few notable plays came from Anibaba to Ríos, and from midfielder Dax McCarty consistently trying to send attackers through on goal. Jones added into the pressure that eventually helped link defense to attack, and gave Nashville their goal.

SOLID FOUNDATION: While the attack tried to expand the field, the defense consistently worked to shrink the space in which Houston could operate. When the Dynamo arrived with the ball on the edge of Nashville’s box, the defensive unit contracted to clear the ball or block shots. In addition to solid play from center-backs Dave Romney and Walker Zimmerman, McCarty played the role of disruptor to perfection in the middle of the park as he won three tackles, made two interceptions, and recovered nine loose balls. Left-back Dan Lovitz, returning from a one game suspension due to yellow card accumulation, kept Houston’s active winger Ariel Lassiter off the scoresheet. Figueroa made the one breakthrough in the 89’ minute after Houston won five corner-kicks in the last 10 minutes of the match, including stoppage time.

NSH – Goal waived off, Daniel Ríos (Jalil Anibaba) 33’ minute: Anibaba plays a through ball from the right-back area for Ríos, who controls it and rolls it past Marko Maric, but it was called offside.

NSH – Goal, Daniel Ríos (Derrick Jones) 49’ minute, 1-0: Jones, who entered at halftime, receives the ball on the left wing, dribbles to the edge of the box, and squares the ball to Ríos, who scored his second goal in as many games and became the first multi-goal scorer in MLS for NSC.

HOU – Goal, Maynor Figueroa (Darwin Quintero), 89’ minute: Houston equalize through their 37-year-old center back. Quintero received the ball from the original corner kick at the back post and crossed it again for the center back to head into the goal. 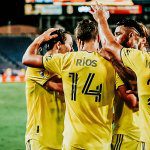