The 25-year-old Rios — who was Nashville’s first MLS signing and spent a year with them in the USL Championship — redeemed himself for a glaring first-half miss when, in the 70th minute, he overpowered his marker to bury a header at the far post. The visitors were forced to play the entire second half with 10 men after D.C. midfielder Russell Canouse picked up his second yellow card in the closing seconds of the first half.

All the highlights of last night's 1-0 win over D.C. United ⬇️#EveryoneN pic.twitter.com/qonmbCOj3G

The first half was light on early chances, with Nashville’s attacking prospects looking to be further diminished after Dominique Badji pulled up with an injury in the 21st minute, leading to his substitution. The opening period livened up late on, though, with Nashville showing more attacking initiative. They had a great look in the 44th minute as Dax McCarty headed a ball back across goal for an open Rios, but the Mexican striker skewed his chance wide.

Nashville was handed a big advantage in first-half stoppage time after Canouse was shown his second yellow card by referee Tori Penso, 11 minutes after picking up his first caution of the match. Both times the card came for bringing down Derrick Jones to stop a promising attack, first just outside the penalty area and then on the right flank.

Despite being down a man, D.C. looked dangerous to start the second half, and probably should have gone ahead had Ola Kamara not mistimed his close-range header and skied Oniel Fisher‘s inviting cross in the 53rd minute. Nashville started to make their man advantage count as the game wore on, though, and drew two strong saves out of Bill Hamid from Alistair Johnston and Alan Winn after the hour mark. The second led to a corner and the first goal of the game, with Rios making no mistake the second time around after a flick on from Dave Romney. 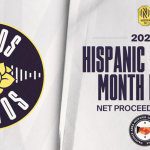 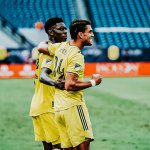