The result placed the Boys in Gold in eighth place in Major League Soccer’s Eastern Conference based on points per game, the new metric for determining the final 2020 standings. Nashville is level on points per game with the New York Red Bulls and New England Revolution, but sits just beneath the two teams due to the Red Bulls’ advantage in overall wins and New England’s advantage in total goals, two of the tiebreakers in the standings.

A back-and-forth battle with Chicago ended in a stalemate at Nissan Stadium. @renasant recap of the draw that stretched our home unbeaten run to nine matches:#EveryoneN #NSHvCHI https://t.co/n8yigDngg4

Clinical Daniel Ríos: Striker Daniel Ríos scored his fourth goal of the season, making him the team’s sole leading scorer. He headed home a Randall Leal cross at the near post to open the scoring in the 28th minute. Ríos took two shots on the night and combined well with his teammates to create looks on goal, notably when he and midfielder Aníbal Godoy exchanged passes in the 23rd minute. All four of Ríos’ goals have come in his last six appearances, and all four were scored at home.

Roaming Randall Leal: Designated Player and winger Randall Leal was Nashville’s creative spark, especially in the first half. He assisted Ríos’ goal with a deft cross, bringing his assist total to a team-high four on the season. Leal has been directly involved in five of Nashville’s last six goals with two goals scored and three assists.

“Wall”ker Zimmerman: Walker Zimmerman made 14 clearances, six recoveries, three interceptions, one block and one tackle tonight. His biggest play came when he slid in front of substitute forward Elliot Collier in the 90+1 minute, blocking the ball off the Fire player for a goal kick to preserve the draw.

What’s Next: Nashville SC will close the regular season with a match at home against FC Dallas on Wednesday and the final one on the road at Orlando City SC for Decision Day, presented by AT&T on Sunday, Nov. 8.

CHI – Boris Sekulić (Mauricio Pineda) 42nd minute: Right-back Boris Sekulić drifts towards the center of the field, and times his run perfectly off the last defender. He receives a pinpoint pass from center-back Mauricio Pineda and finishes at the near post.

Nashville SC takes on FC Dallas on Wednesday, Nov. 4 for the fourth time season. Nashville has a record of 2W-0L-1D against Dallas. The match kicks off at 7:30 p.m. CT at Nissan Stadium and will be broadcast live on MyTV30, ESPN 94.9 and El Jefe. 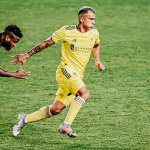 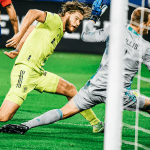